Jackie Chan has left imprints of his hands and feet in cement at Hollywood’s Chinese Theatre for a second time – after his previous prints were lost.

Film star Chan, 59, whose career has spanned 40 years, first left imprints in the theatre forecourt in 1997.

But the cement slab featuring Chan’s prints has since disappeared.

“Twelve years ago I did the handprint, but somebody stole it. That’s the second time,” said Chan, on Thursday. “I really want to thank you.”

However, representatives at the newly named TCL Chinese Theatre, previously known as Grauman’s Chinese Theatre, said they did not know when the prints vanished but were sure that the slab was not stolen.

Slabs are changed often to make room for new entries in the collection.

Chan told fans that he had first dreamed of having his prints in cement at the theatre when he was invited to a ceremony featuring Sylvester Stallone in 1993.

“My first time in the Chinese Theatre, I walked on the red carpet … and I saw so many stars doing the interviews. And at that time I had nothing to do, standing there looking around.” 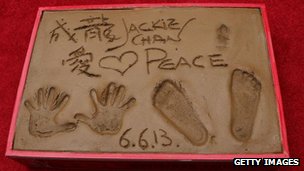 “During all those years I dreamed. Slowly, slowly, I got there,” said the actor, who has starred in more than 100 films.

Chan, who is the first star to have his prints done twice, was joined by Rush Hour co-star Chris Tucker and Karate Kid co-star Jaden Smith.

“It was just an honour to be in a movie with him,” said Tucker. “He’s been a mentor, a big brother. He’s the best guy in the whole wide world,” he added.

Chan has become one of China’s biggest film stars, crossing into Hollywood movies with his Kung Fu fighting skills and unprecedented ability to do his own stunts. He previously worked as a stunt co-ordinator for martial arts legend Bruce Lee.

Last month at the Cannes film festival, Chan told Reuters that after countless broken bones and smashed teeth, he was giving up doing his own stunts but hoped to continue acting.

His imprints join those of many screen legends including Clark Gable, Marilyn Monroe and Humphrey Bogart.